STATE OF THE WORLD 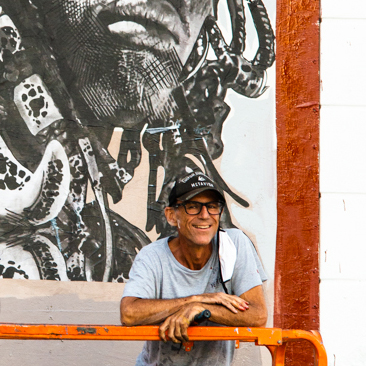 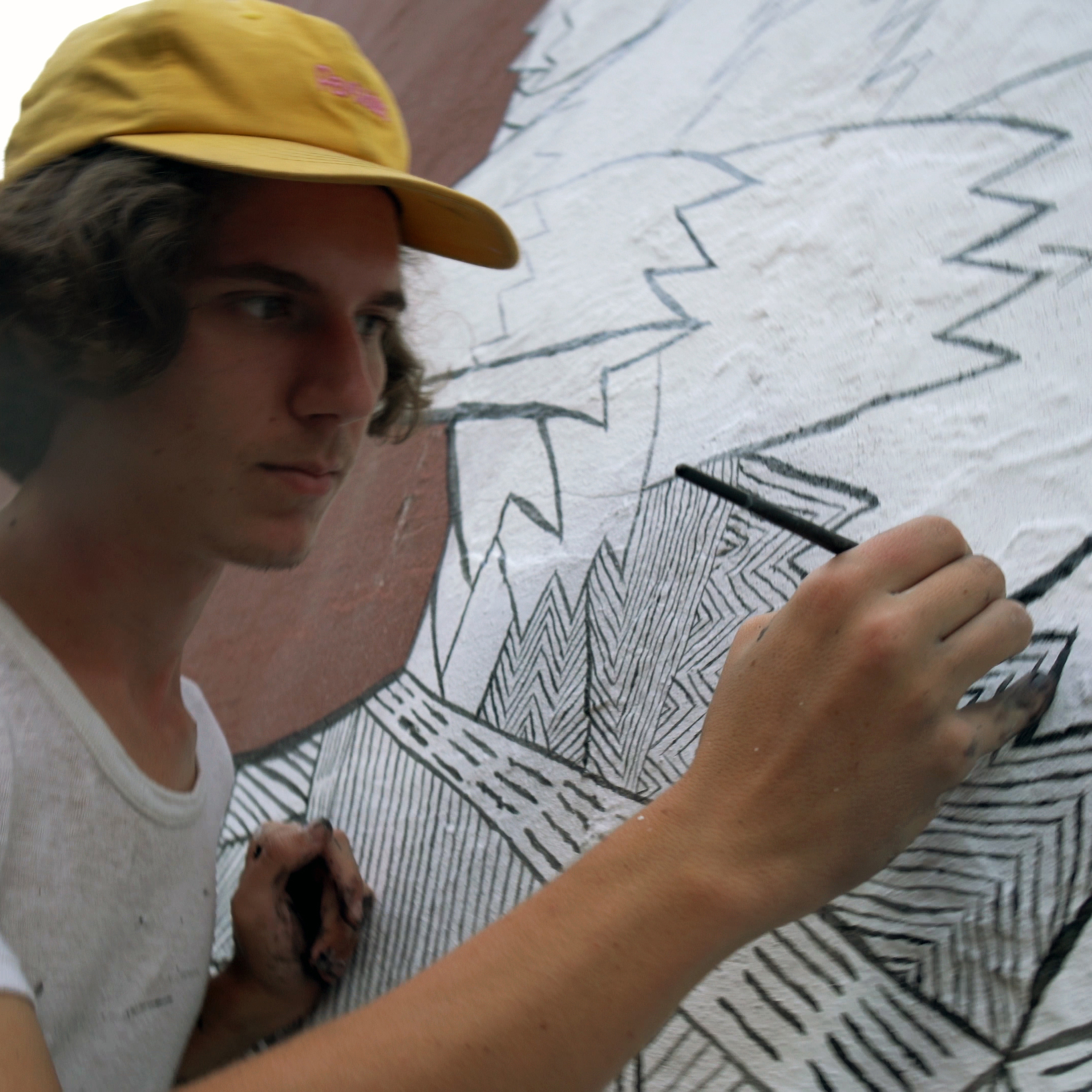 Keya Tama is an African street artist living in Los Angeles, who has been producing murals and participating in exhibitions around the world since the age of thirteen. He is the son of celebrated street artist Faith 47 and influential tattoo artist Tyler B. Murphy. So far, he has had three solo shows, designed an international campaign for one of South Africa’s biggest clothing brands, and released three independent graphic novels. He is a multitalented artist simultaneously producing music, filming, animating, and painting walls. He aims to bring all these elements together to create a new way of storytelling. 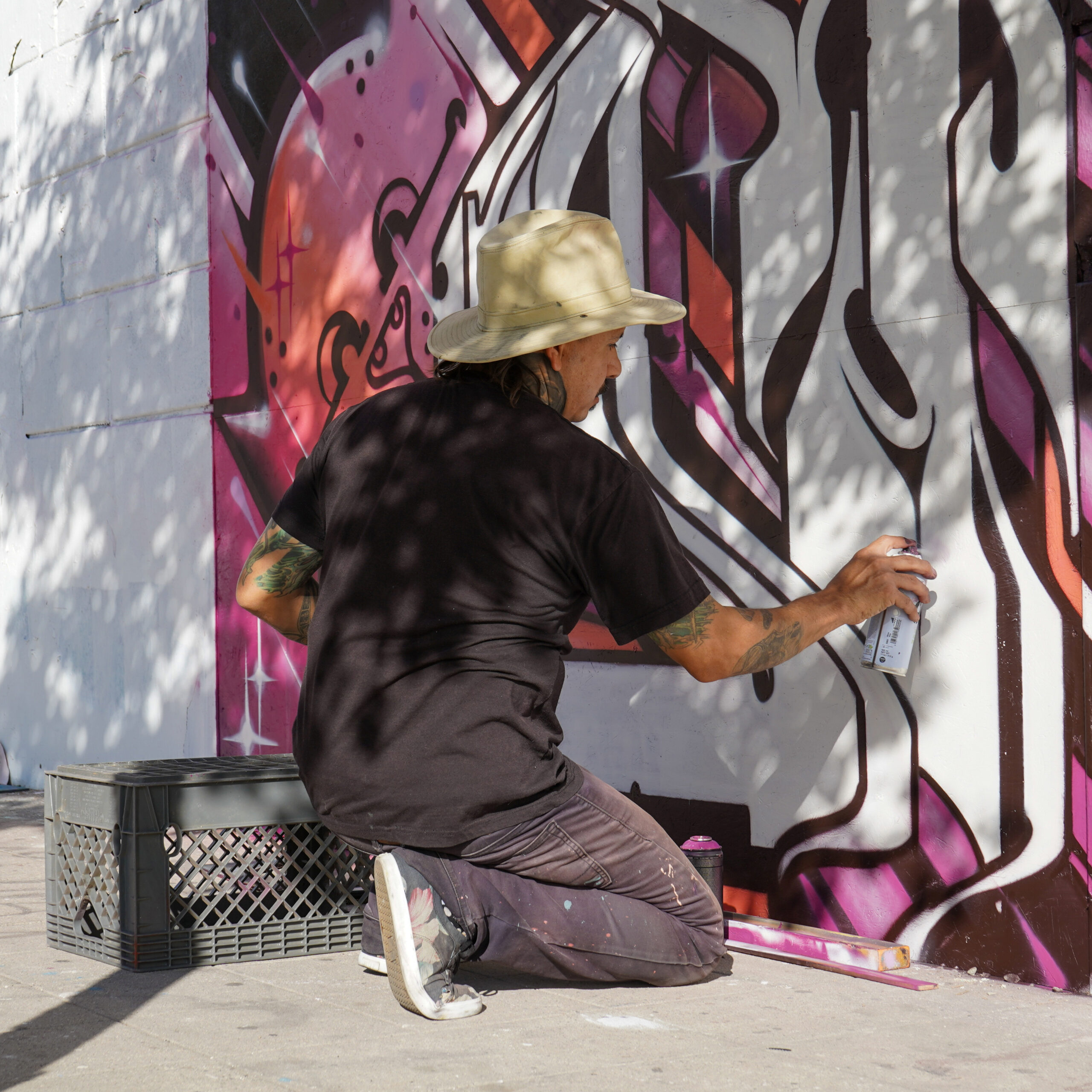 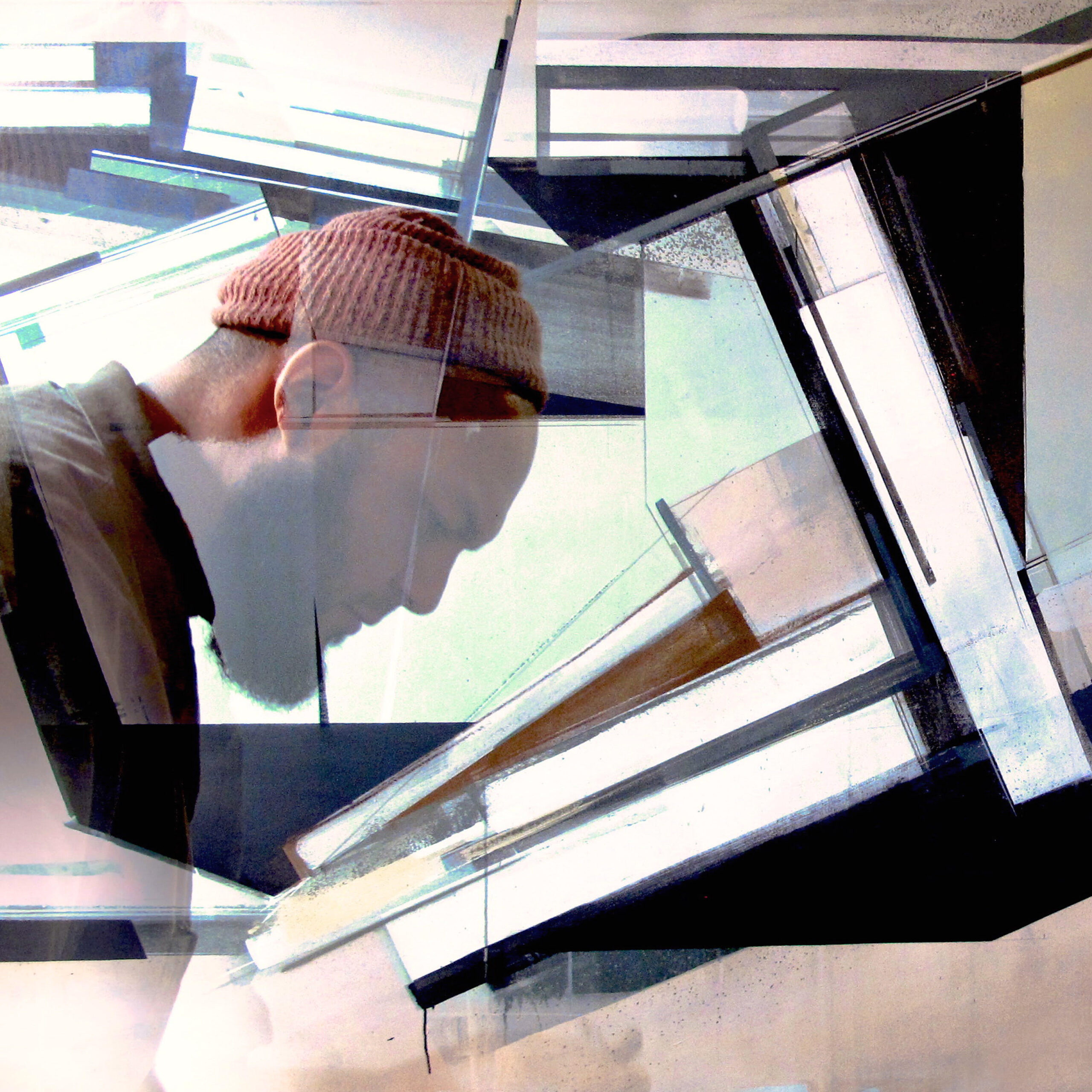 With a deep interest in process and structure, Augustine Kofie creates works of intense detail centering order and tension in both his studio pieces and mural interventions. The precision of Kofie’s “drafted” art is inspired by mechanical drafting and the language of modern architecture and uses the paper detritus of the 20th century as building blocks. In his quest for balance, Kofie harmonizes opposing and contradictory dynamics, setting futuristic compositions against vintage earth-toned palettes and creating technically complex, meticulously structured formations through handmade line-work and layering. Active in the west Los Angeles graffiti scene since the mid-nineties and an active member of the LA graffiti crew ‘Under The Influence’, the artist’s work reflects the influence of the craft of deconstructing lettering, urban culture, contemporary Diy music, and 1960s-70s iconography to create a unique language. 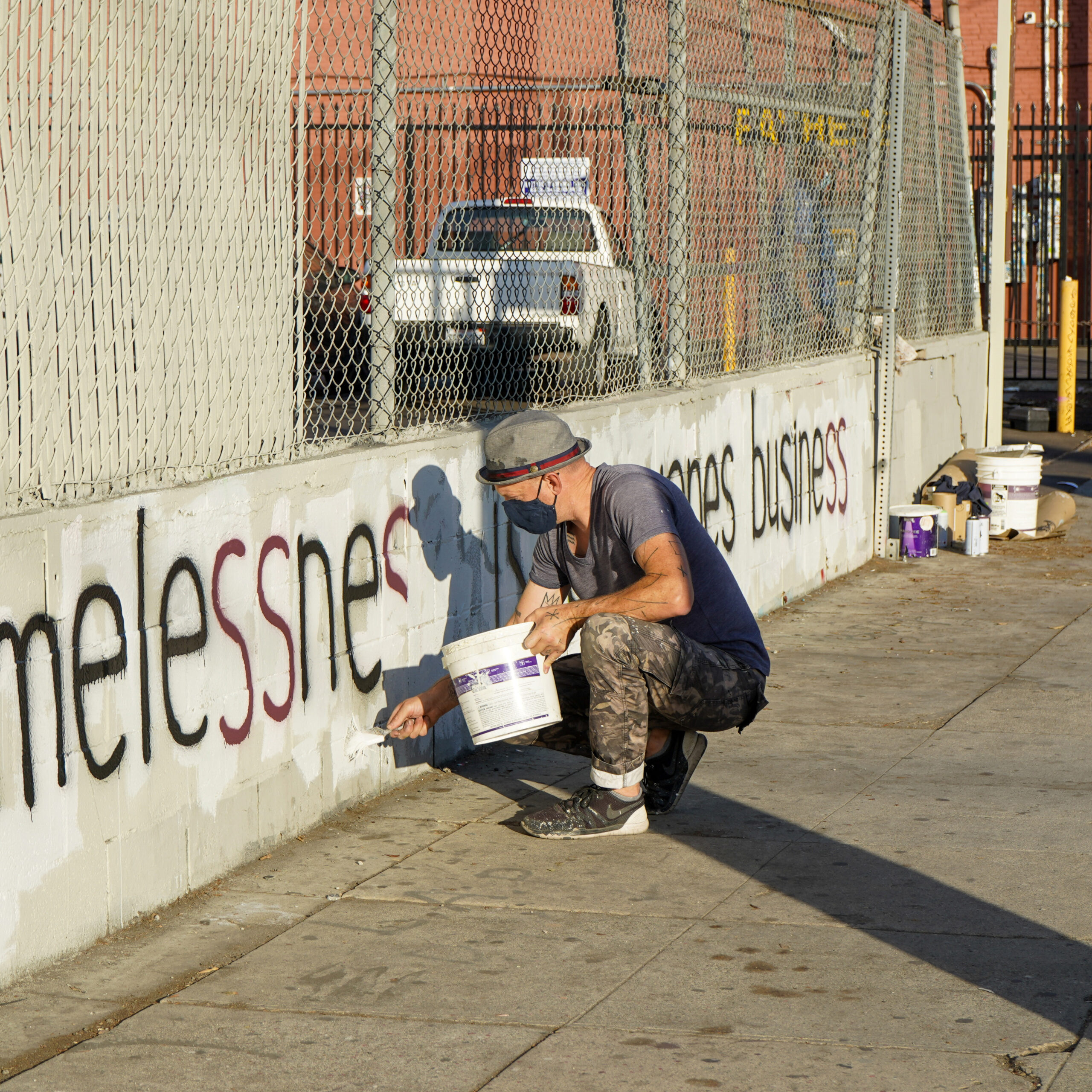 Brian Ormond is a contemporary street artist born in Cork, Ireland. Since 2015, he has been making paintings, drawings and sculptures reflecting the act of giving, while working with a variety of mediums such as acrylic and oil paint, and found objects. The majority of his artwork is gifted or donated to friends and individuals who admire his work. He aims for the public to take what they want from his street art, utilizing his own photography as a means of documentation and self-expression. Brian currently works from his studio in the Downtown Los Angeles Arts District. 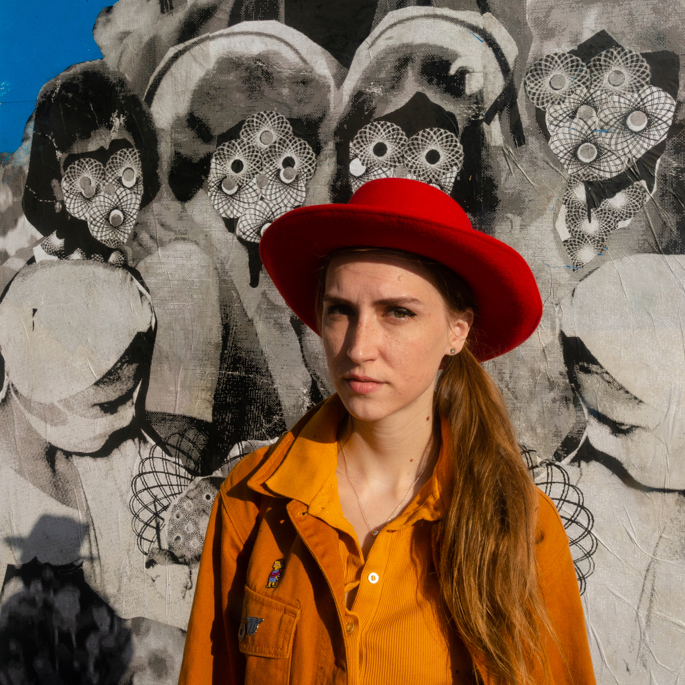 Darcy Yates is a So-Cal native who grew up next to the LA forest. Her artistic journey began at a young age by visual problem solving through color. Unable to shake her visual awareness, she embraced her career as an artist. Yates received her BA from California State University Northridge (CSUN) in 2013 and won “Best in Show” from CSUN’s juried art competition her Senior Year.  She is now a seasoned artist and animator being shown at multiple galleries all over the United States. On top of her gallery and animations, Yates has murals throughout Los Angeles. Yates’ work captures the spirit of soul and imagination through colors and shapes. Her work evokes the feelings of a child walking through a dark and silent hallway; frightened but ceaselessly curious of what lies ahead. 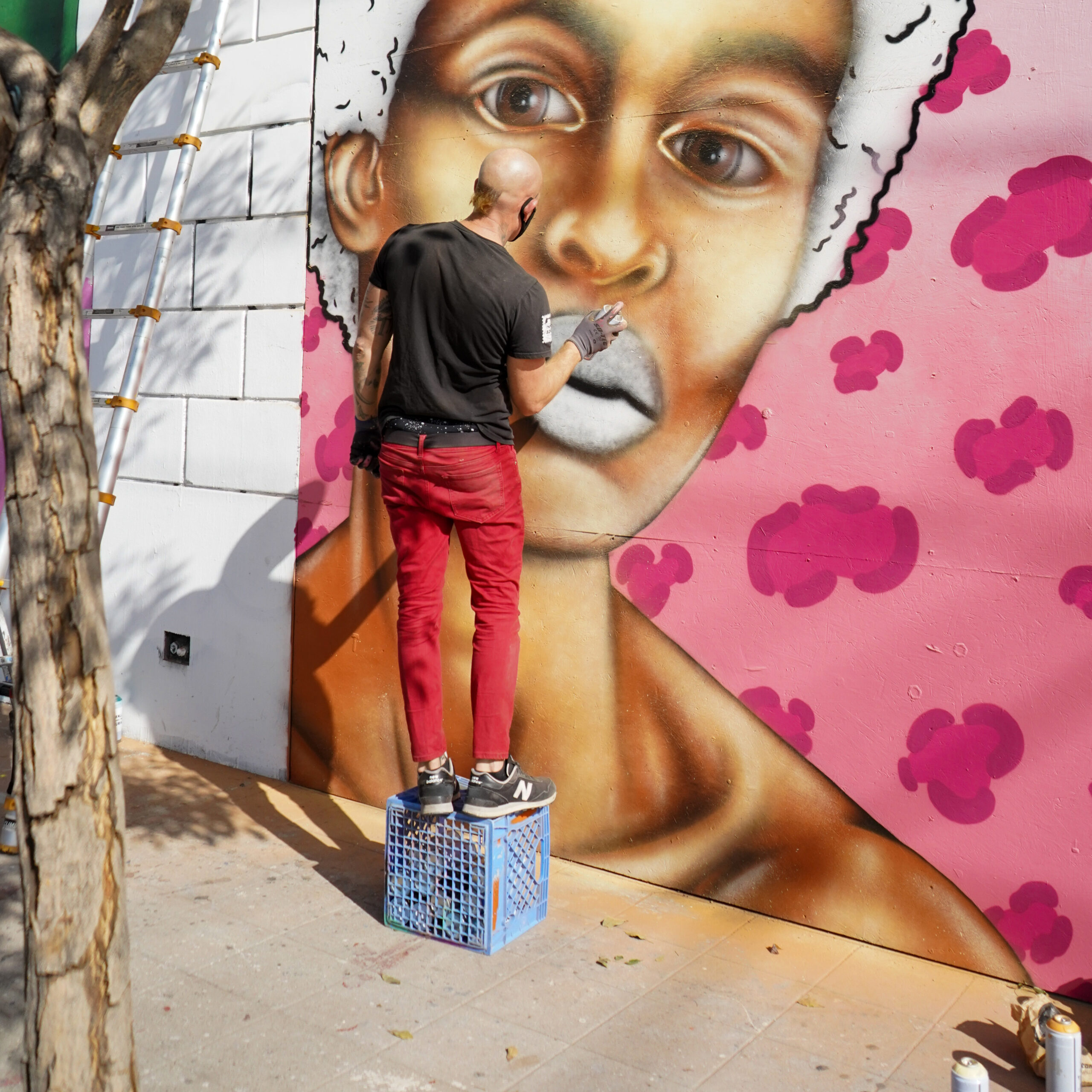 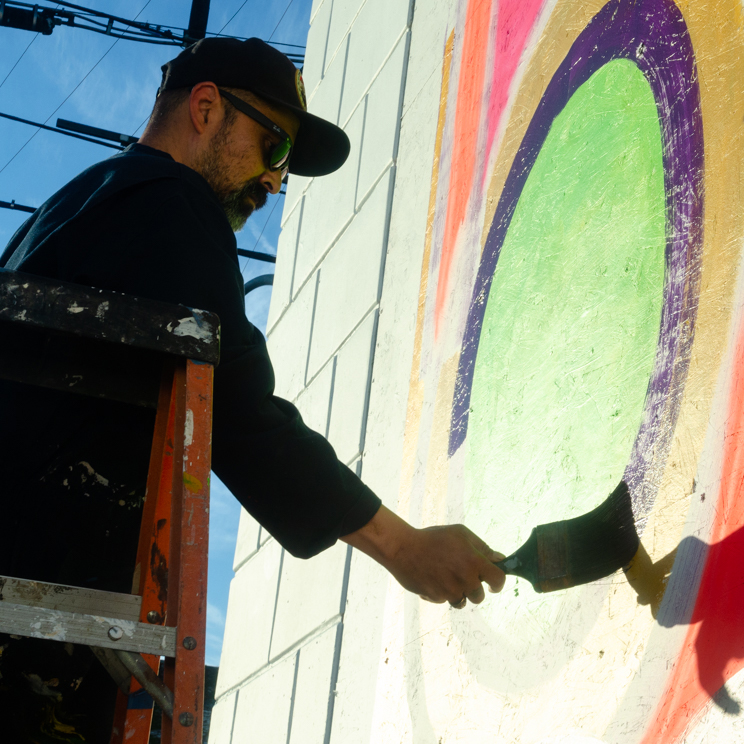 Jose “PRIME” Reza (K2S) is a Mexican-American graffiti artist born and raised in the Pico-Union District of Downtown Los Angeles. Prime is credited with being a founding father of Los Angeles stylized graffiti lettering, a hybrid of Cholo lettering and East Coast style graffiti that is often bold, aggressive, and monochromatic. Prime is considered one of the most influential artists in the history of Los Angeles public wall writing, combining “traditional east coast painting techniques with geometric gangster-style blocks.” 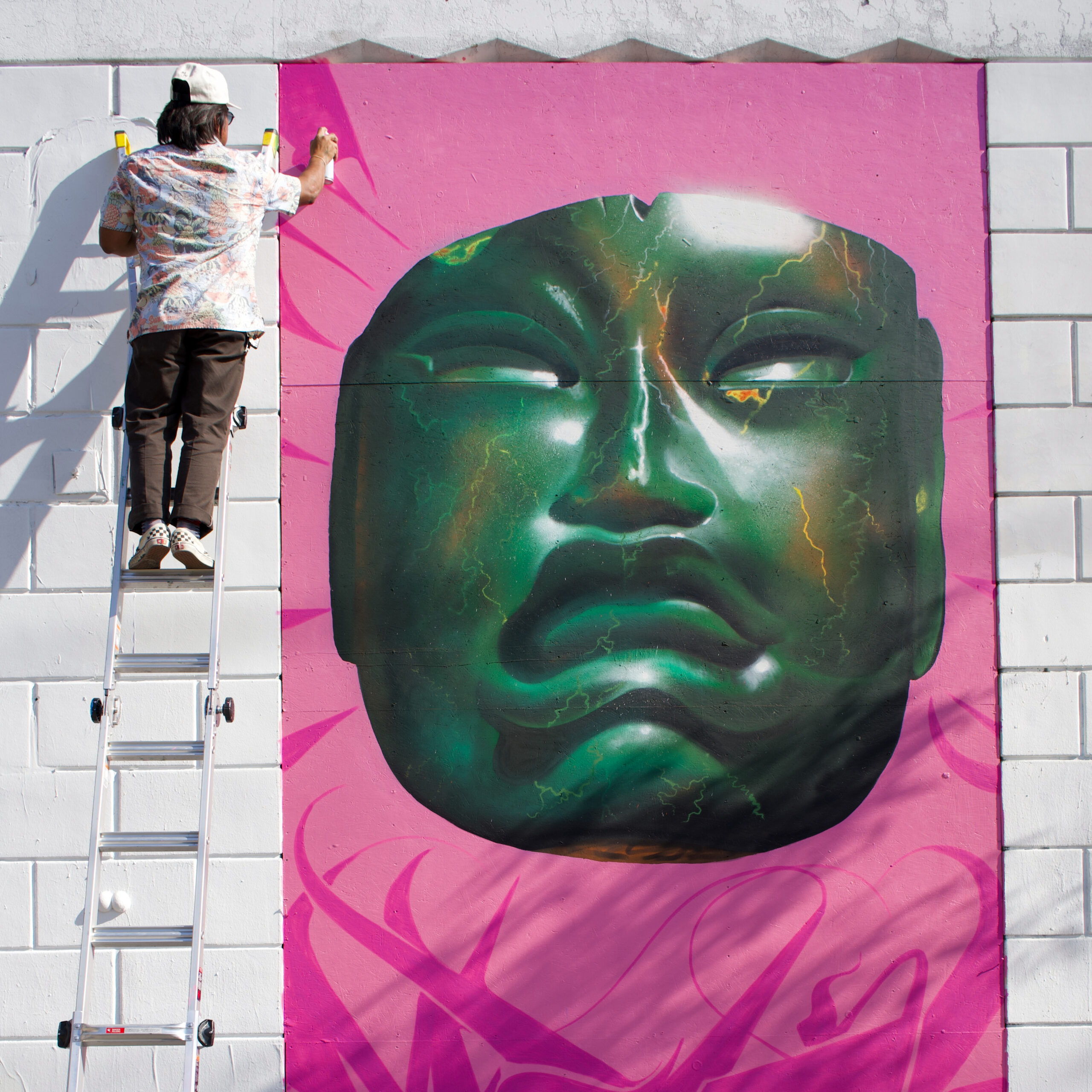 Andy Rios aka LOVEYODREAMS is a Mexican American artist born and raised in South Central Los Angeles. He specializes in illustration, design, and murals. His work can be described as bold and gentle with electrifying colors and attention to detail. He was one of the first artists who contributed to the original paintings on the building at 2001 E. 7th Street (while working under the alias MIDZT). 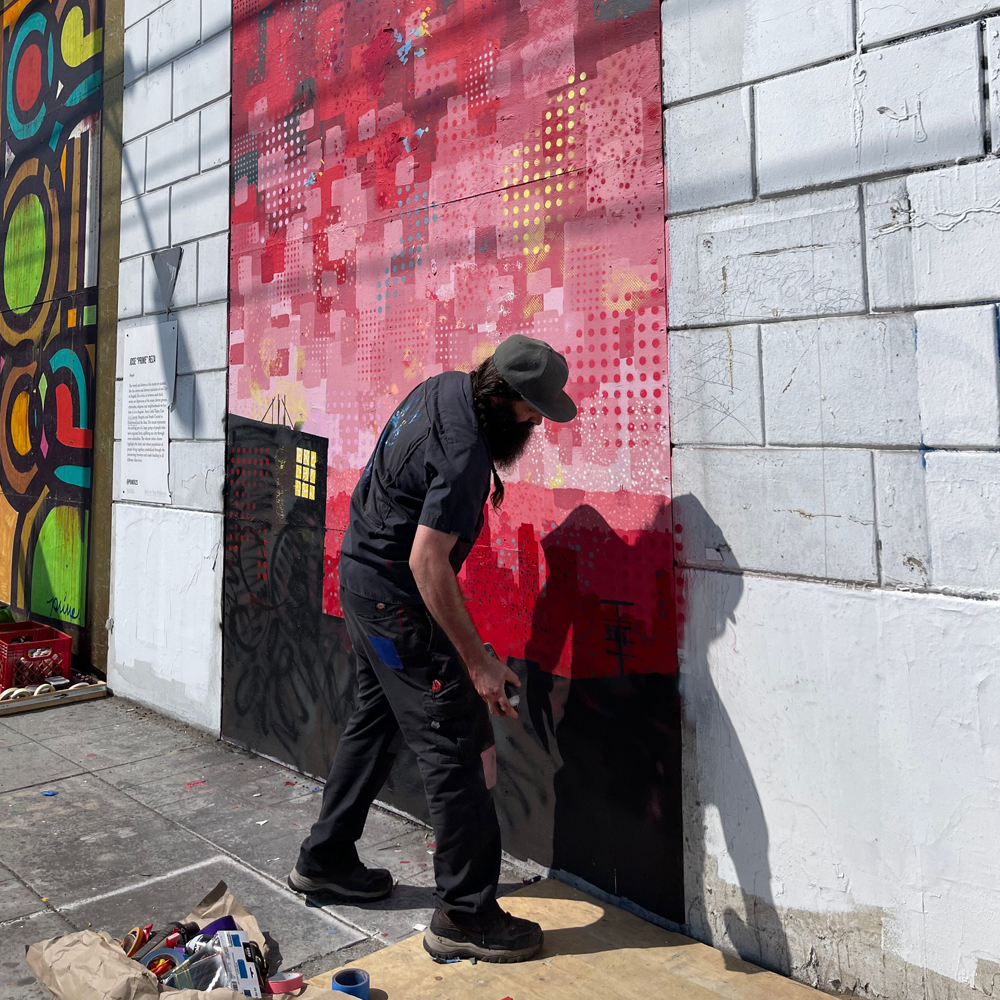 Nicholas Bonamy is a Los Angeles native, visual artist, and Art Director for Art At the Rendon. He graduated from Art Center College of Design and has many years of experience working in design and fabrication across the entertainment industry. Combining artistic sensibility and practical know-how, Nick specializes in making ideas into reality. 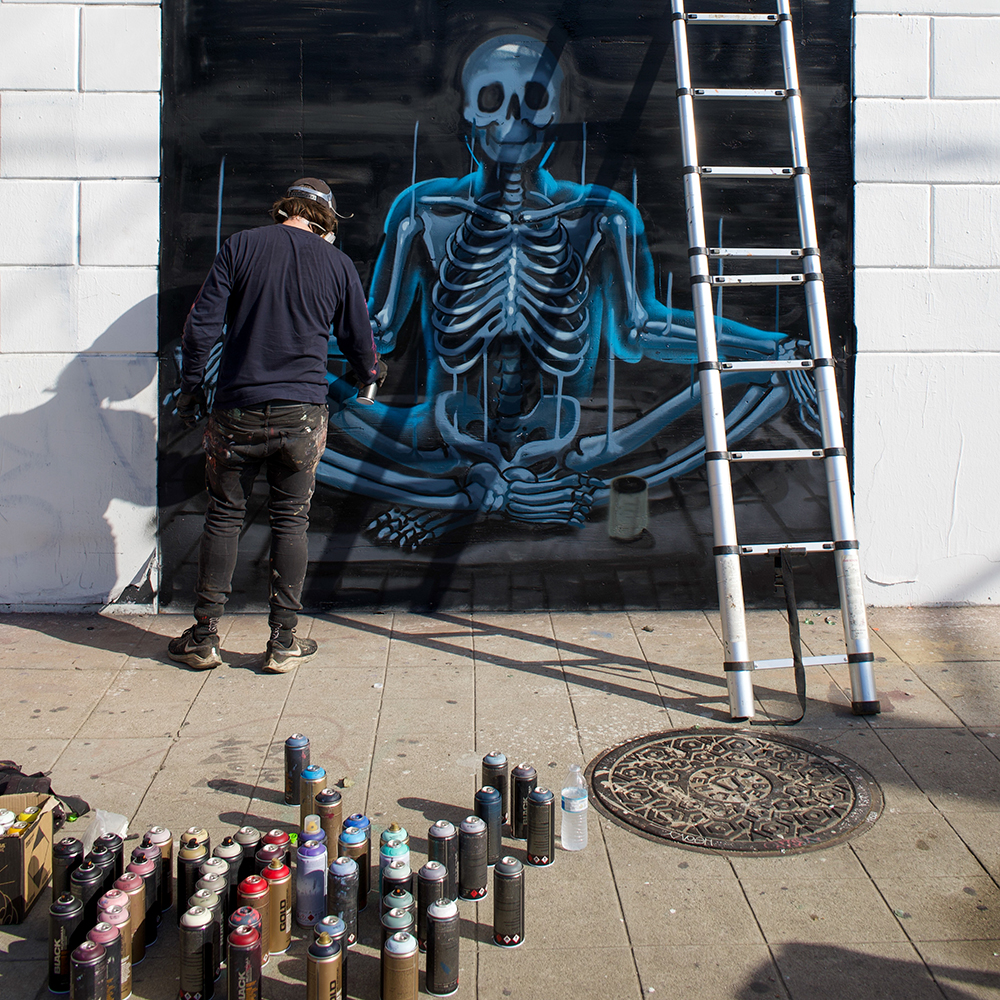 Breaking surfaces, seeking depths – layer by layer. Driven by an insatiable curiosity, NYCHOS creates art in order to examine a question that has always been with him: How deep can you go?

NYCHOS is an alter ego, created by a kid who grew up amidst a clash of cultures: A world, where Austrian Tradition and its Hunting Culture meets Eighties Pop Culture, Comic and Television. The visual input from back then still contributes to the output of the adult.

By the means of anatomy, NYCHOS investigates the living species across different contexts and different media. His favorite tool is the spray can, his favorite surface is large. Questioning contrasts, he unifies looseness and accuracy. Severity and irony. The inner and the outer world. The dark and the bright. And most importantly, life and death. Within his oeuvre, one embraces the other. All becomes one.

NYCHOS creates art from deep within his soul. Deeply rooted in Graffiti and shaped by the visual inputs of his early years, his work comprises murals, fine art, illustrations, sculptures and animations.

NYCHOS is the founder of Rabbit Eye Movement, co-founder of THE WEIRD and member of the LORDS crew. His artworks have been exhibited worldwide and his large-scale murals give character to cities all across the globe. He currently lives and works both in Vienna, Austria and Los Angeles, California. 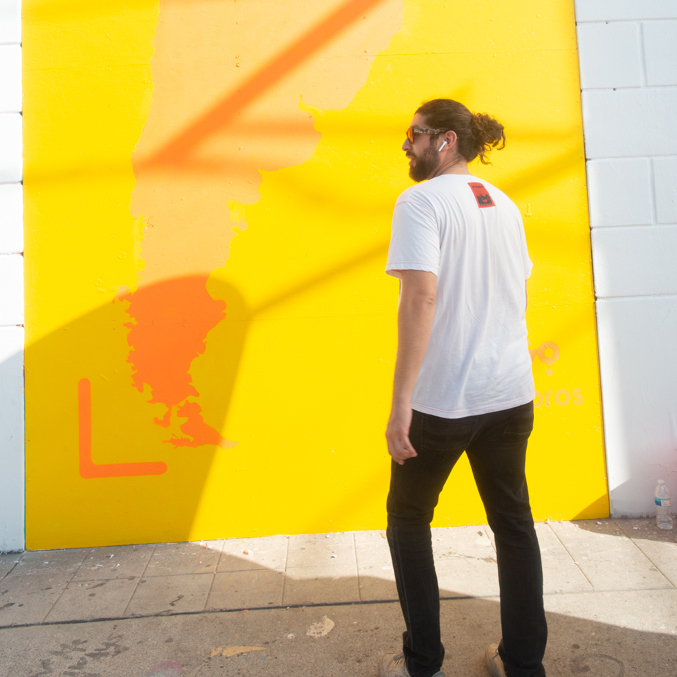 ABOUT THE COUTO BROTHERS

The Couto Brothers are two self-taught artists who share a passion merging their kaleidoscopic style with cultural imagery in contrasting ways.

As brothers who were raised in Brooklyn and Brazil, and having traveled extensively around the world, they connected later in their lives to suddenly create works of art together and simultaneously.

They introduce their work by using historical and social themes against bright colors and shapes to channel a refreshing perspective and challenge the ideas of the world.